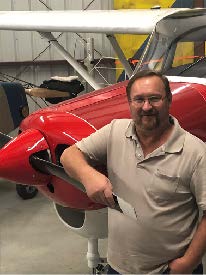 Here we are moving from a really hot and wet summer to a hopefully much nicer autumn, at least here on the east coast. During the summer months we had: The Annual Convention in Wichita where many of us enjoyed the fellowship with our membership and participated in many interesting tours. Then we were off to Oshkosh, where things got off to an interesting start with severe rain on Saturday before the opening of AirVenture 2019, causing lots of confusion and delayed arrivals. Then several members attended the Southwest Regional in Arkansas in September.

There were several opportunities to enjoy the four F’s. You know, Fellowship, Fun, Flying, and Food! In keeping with the four F’s theme, the weather finally cooperated and allowed my wife and I the chance to attend the Carolinas Chapter meeting. While the weather was CAVU from Maryland to North Carolina, there was some weather to the southwest and Chapter President Steve Culler was unable to get out. They picked the W17 Raleigh East Airport, which was kind of interesting to find, but well worth the trip! You guessed it, plenty of the four F’s to go around. We were treated to hamburgers, hotdogs, deviled eggs, beans, and plenty of desserts, but departed before the homemade ice cream was done.

We met some very nice people and got to see several Short Wings in the few hours we were on the ground. Airplane people are some of the friendliest people you will ever meet, but Short Wing Piper owners and pilots are just one rung above that. Once a Short Wing pilot, always a Short Wing pilot! There was everything but a Clipper there and a real Pacer, but there were a couple of PA22/20’s, a PA-17 and a couple of PA-22’s, all in all some pretty nice airplanes on the field. The best thing was that Faye and I were welcomed with open arms even before anyone figured out who we were. Our fabric covered Pipers got us together, but the people provide the fun and fellowship and as it turns out the airport supplied the food.

Okay, now that we know what has happened, lets talk business for a bit. We all know we have had some lean years and as a result The News has been reduced to a quarterly publication. While it did help cut operating cost, it has also caused some unforeseen issues. The main issue is getting the word out to the membership about upcoming election of officers. Because we hold two-year terms and alternate elected offices every other year, we have two offices coming up for election at the 2020 convention. The office of Vice President and Treasurer are both up for election, and both incumbents have indicated they would like to give someone else the opportunity to serve the club. Adolph has served two terms in office as Vice President and given generously of his time to the club. Claire has taken on a lot and has given many hours to the club and come up to speed on the software, but once again, she is ready to move on. So, we are looking for candidates for both positions. If you know someone you believe would be a good fit for either position, talk to them and submit their nomination! Remember we are all volunteers, so don’t be afraid to volunteer and make your club better for the future.

Yes, there is even more business to consider! Cliff has agreed to put on the 2020 convention as long as it is in Wichita again. So, we have 2020 covered, but it isn’t too early to start planning for the 2021 convention. We need a chapter or a group to step up and take over the convention so we can solidify the location at the 2020 convention. At your next chapter meeting please talk it over with your members and let’s have more than one location to consider for 2021!

Now let’s look ahead to next year. Does anyone know what happens next year? That’s right: the Pacer turns 70 years old! Currently we are in the early stages on planning, but we want to try to get a mass arrival at Oshkosh and group parking in 2020. The really cool thing is 2021 makes the 70th year of the Tripacer and we want to do the same for them. If we are successful at accomplishing this, we will have group parking up front for the Short Wing Pipers two consecutive years! Additionally, we are trying to arrange a get together one evening while at Oshkosh at a local member’s hangar, with more details to come!

So, as I see it, we have a bright future with plenty of good and fun things ahead of us. Keep your eyes open and looking toward the sky, because Faye and I may just show up at your local chapter meeting. I want to close with a challenge to all of our members to donate to the Education Foundation and remember to keep the four F’s alive and well in the SWPC.

May all of your landings be smooth.